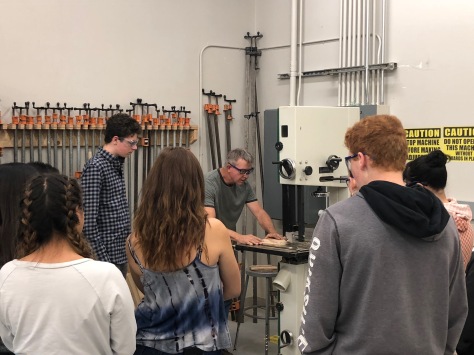 New teacher David Linquist shows students how to properly use a band saw.

As the first week of school comes to an end, the four newest teachers at Kayhi continue to get settled in for their first year. The teachers will be filling the health, culinary, Haida, and woodworking/welding/construction positions.
Principal Bob Marshall said he is excited for this year, especially seeing how these new teachers will have “fresh eyes” on their subject and take it to the next level.
“All four of them have very different personalities than the people that had those jobs before,” said Marshall. “But I’m very excited about all of them because when we interviewed them they came out really strong and had a lot of good backgrounds in their particular subject area.”
The culinary position has been filled by Cameo McRoberts who has worked as a chef in Ketchikan, Seattle, and Chicago. McRoberts plans on taking her experiences and skills as a chef to really engage her students and have them prepared to work in the food industry after finishing the class.
“I started cooking right out of high school and I’ve worked at fishing lodges on cruise ships, and a couple of fine dining restaurants,” said McRoberts. “I’m going to teach basic cooking skills and some fun stuff so anybody that finishes the classes will have the skills to work in pretty much any food industry job they want.”
David Linquist, the woodworking, welding, and construction teacher has taught in four states, and in ten different schools, including a year in Barrow. Linquist feels as if he has “died and gone to heaven” since his 31st year of teaching will be at Kayhi where the facilities are amazing and his students are fantastic.
“This school is very nice and well maintained, and the shops are very well equipped,” said Linquist. “So for me that’s kind of exciting because that allows me to do some things that I’m not able to do in other schools since the facilities aren’t near as good as they are here.”
Previously teaching culture and art to elementary students, Linda Shrack will be teaching Haida this year. Shrack hopes to inspire her students to teach the haida language to their peers as the language is disappearing quickly.
“I am looking forward to the students using the language outside of the classroom and hoping that they will teach some friends a little bit of language,” said Shrack. “The Haida language is very endangered, and we only have two fluent speakers locally.”
Dave White, who previously taught at Valley Park, Charter, and Point Higgins Elementary, will be spending his twentieth year in the school district as a health teacher. White is also excited to be able to focus on science which has always been his favorite subject to teach.
“I am excited to bring health into kids’ lives,” said White. “And to work in such a positive environment.”