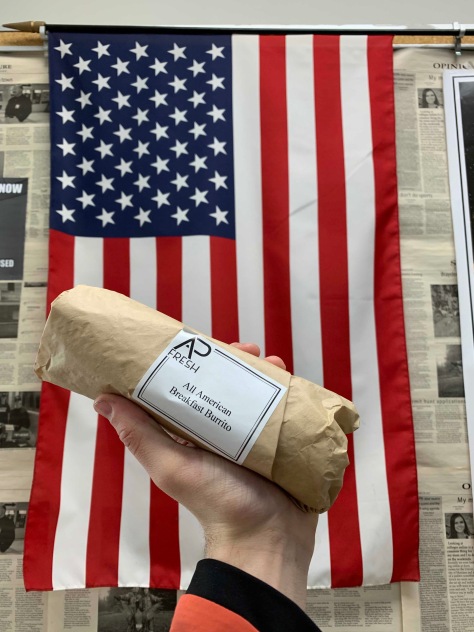 Once you go gravy, you never go back.
I am an American, so I eat American food. A delicious burrito named, “The All American Burrito” is unbeatable.
The All American Burrito is a breakfast burrito stuffed with the good stuff. Eggs, sausage, hash browns, and bunch of cheese. Hands down, it is the best breakfast burrito in Ketchikan. Especially for the price: $4.99/lb.
The marketing scheme behind the All American Burrito is genius. You can support local buisness, display your patiotic beliefs, and eat a delicious burrito, all while you drive to work in the morning. Not to mention the educational benfit of a solid breakfast for students.
Is it possible to improve this burrito in any way? Simple, add gravy. Yes, a breakfast burrito filled with gravy. If that doesn’t make you think of bald eagles and the star spangled banner, then you must not be from around here. Simply go to the deli and politely ask, “Can you make me an All American Burrito, but with like gravy and more meat?” Ask and you shall receive. The perfect custom burrito has bacon, ham, sausage breakfast potatoes, hashbrowns, cheese and gravy. The best part of building your own burrito is the price. Still the same: $4.99/lb.
If you are looking to grab a burrito on the run, the hot case is your best friend. The first batch of freshly made burritos is put out around 6:00 a.m. By 6:25 a.m. the majority of burritos are taken by vigor employees who work just across the street. The hot case is then restocked sometime in the following hours. If you show up anytime after 10:00 a.m., you will have little to no chance at scoring one of these American creations.
However you like your burrito, A&P will build it. But seriously, add gravy. It puts the America in All American Burrito.